Dave  – In his own words 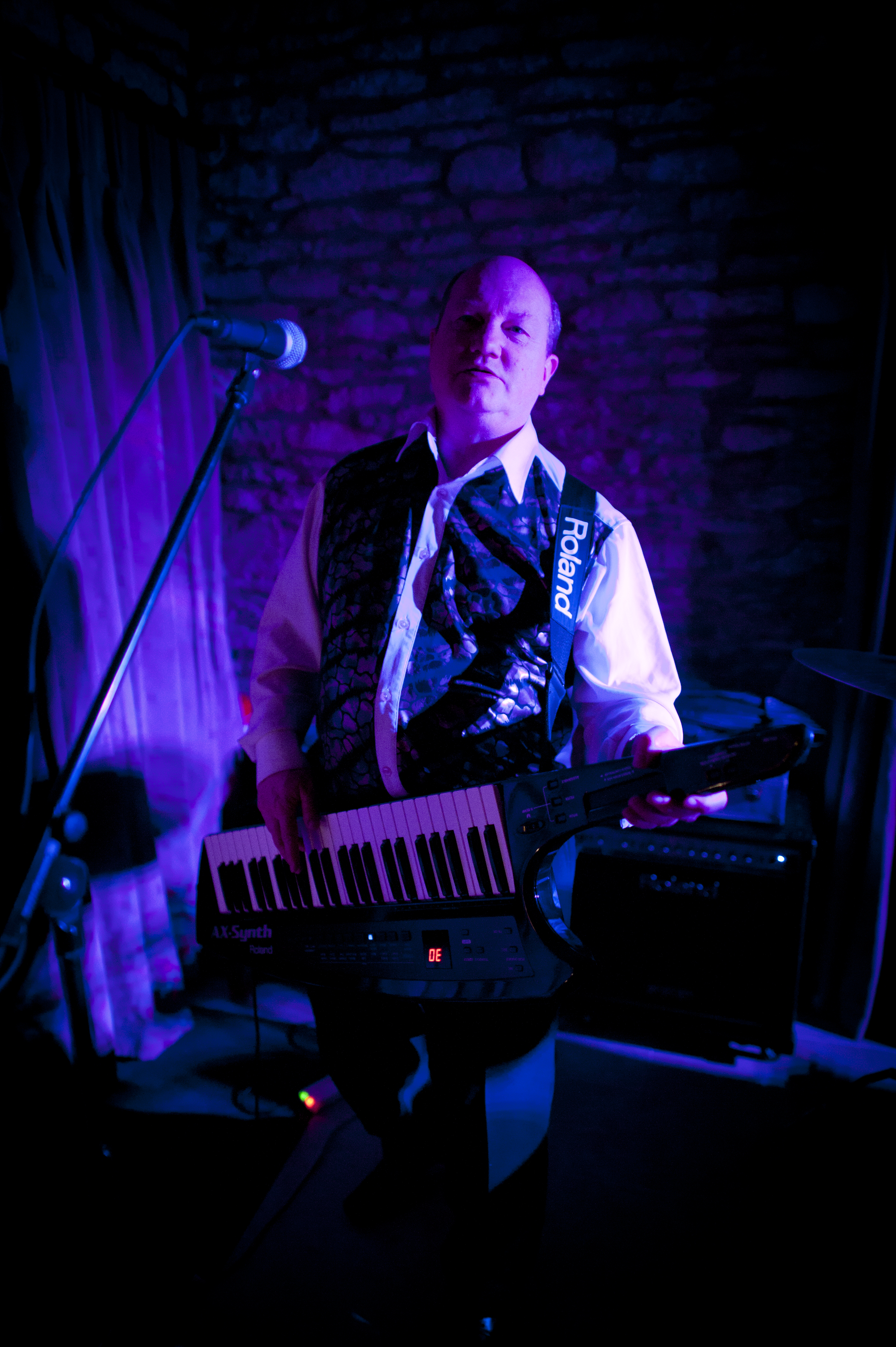 From my first sighting of a gramophone player I’ve been into music. I enjoyed stacking up five or six records to play automatically and in the process I think I wrecked most of my parents’ 78rpm record collection. Early influences included Beatles, Manfred Mann and a host of 60s bands who’s songs I’d hear on the wireless or on Jukebox Jury on the black and white TV. After seeing my first live band at a touring circus, I became obsessed with wanting to be a drummer. My parents wouldn’t entertain the idea and sent me for piano lessons instead. I stuck it for about 4 years, hating scales, Beethoven, Mozart, Bach and most of all The Sound of Music. Eventually my piano teacher convinced my Mother I was not destined to be the next Russ Conway and lessons ceased immediately. Soon afterwards I bought my first 45rpm record, Ball of Confusion by The Temptations. This was the start of a two year love affair with Motown and soul music until I heard the Machine Head LP by Deep Purple. My liking for rock music developed quickly and I soon built up a large record collection, often trading in poorly chosen impulse buys to fund new ones. I never abandoned soul and opened my ears to other genres such as jazz rock, folk, roots, and new wave. I can’t get too excited about labels. To me there are two pigeon holes, ‘like’ and ‘don’t like’. Rolling the clock forward to 1980 I found myself lugging speakers and gear around for Strange Days. It was the nearest I got to being in a group but that was shortly to change. A local band was struggling to find a singer and my sister put my name forward. I got the job. When one of the guitarists left suddenly we chose not to replace him. Synthesizer music was dominating the charts and someone suggested I dust off my piano skills and buy a synthesizer.
In 1992 I was invited to rejoin Strange Days as temporary replacement for bass guitarist Gary Fletcher. When the move became permanent a few months later, the band featured two keyboard players and a drummer, somewhat unusual, but the formula seems to work and the current line-up has been together for 18 years.
In recent times, like Ken and Paul, I’ve worked in a couple of side projects. Firstly as bass guitarist in Midas before moving onto bass guitar duties with rock band Sydewynder. It’s refreshing to try different things.
Q&A
Q: Name some of the artists who’ve inspired you over the years
A: Russ Ballard and Argent, Rare Earth, Glenn Hughes, Wendy and Lisa (ex Prince and the Revolution). Undoubtedly my favourite current band is The Feeling.
Q: Name two albums / artists that look out of place in your record collection?
A: (a) Kids from Fame (b) Jah Wobble.
Q: What instruments and amplification do you currently own?
A: Roland AX7, Synth-Ax, Juno G; Kurzweil PC361; Korg M3 with Radias expansion board, Triton and Karma. I make that seven keyboards which is five too many! It’s a similar story with guitars. I have three basses; a Fender Steve Harris Precision, a Fender USA Standard Jazz and a Musicman Sterling. I also have two Fender Stratocaster guitars, one is a USA Standard, the other a Mexican Standard.
Until recently I was using a Bose L1 system with Strange Days and a Roland D210 Bass Combo with Sydewynder. I still have these but I recently acquired a Mark Bass system consisting of a little Mark II amp and a Traveller 115P cab. It’s lightweight, sounds superb and can deliver lots of volume when needed!
Q: What is your most memorable gig?
A: Without a doubt Rampton Secure Hospital in Nottinghamshire. I was roadying with Strange Days for that one. What an eye-opener.
Q: What is your funniest incident at a gig
A: Back in the days of Gary Fletcher a gateau fight broke out in the van on the way home from a gig. We really went for it. There was chocolate cake everywhere and my ribs were hurting next day from laughing.
Q: Have you considered playing bass guitar in Strange Days?
A: I do occasionally but Strange Days tends to work off the cuff rather than to a set list. This way of working doesn’t lend itself too well to chopping and changing instruments at the drop of a hat. If I’m honest, I’m a better keyboard player than bass guitarist so if we’re improvising, which we often do, I feel more comfortable doing so on keyboards. Ken is actually an accomplished guitarist. I would like to see us exploit this by putting together a handful of songs featuring guitars only and no keyboards at all. We’ve dabbled in rehearsal and it brings a whole new dimension to the band. 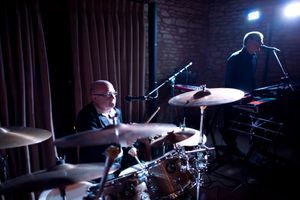 Paul is the man in the middle, responsible for generating the rhythm and regulating the tempo. Paul got the urge to play drums in his mid-teens and at the age of 16 he bought his first kit, a white Premier Olympic kit out of the local paper for the princely sum of £18.
His first taste of being in a band followed a couple of years later when he joined Lady Astoroth, a band he remembers fondly. When the band went separate ways Paul continued his apprenticeship with another local band called Midas which kept him occupied until 1975 when he was invited to join Strange Days. Seeing an opportunity to play more regularly and to develop in a wider variety of styles, he accepted the offer and has held the position for an impressive 36 years.
Never one to stand still, Paul has always taken an interest in developing as a player and even after many years of playing, he likes to keep an eye on what other drummers are doing, be it a session man at the top of the profession or a new kid on the block with a local band. He is very modest about his playing abilities and you won’t find any snobbery or ego problems.
With regards to equipment, Paul studies the market carefully before buying a kit. Sound and build quality matter are just as important to him as appearance and the same ethic applies to his choice of hardware, bass pedal and cymbals and cases. He’s currently playing a Sakae Kit and also a  DW Collector’s series Kit with Zildjian cymbals with a rather impressive Yamaha Custom Kit as reserve.
In the 1980s when electronic music took a stronghold, Paul disposed of his Sonor acoustic kit in favour of a Simmons SDS5 kit. Most locals had never seen one before and it was a big talking point. Watching him trying to connect up five cables to the appropriate sockets on the mixer desk in the early days was quite entertaining. As Simmons developed the technology Paul moved onto a new generation kit which gave him access to more drum sounds and better pad response. However, towards the end of the decade interest in electronic kits started to wain and Paul reverted to an acoustic kit, this time a REMO. For many years he also played a full size timpani (kettle drum) which was put to good effect on a couple of electro classical covers. It shouldn’t go unmentioned that Paul puts great emphasis on keeping his drums fully tuned ahead of each performance. The same applies to his voice. Drummers singing lead isn’t quite as unique as it used to be but few are quite as accomplished and it is a role that Paul takes seriously, sharing the duties with Ken.
Q&A
Q: Name some of the artists who’ve inspired you over the years
A: Performers include Santana, Steely Dan and 10cc. Influential drummers include Buddy Rich, Steve Gadd, Sam Kelly and Phil Seamen.
Q: Do you have any favourite current artists:
A: There’s a lot of young talent around at the moment. I recently saw Paloma Faith and Eliza Doolittle in concert, both great. I’m with Ken and Dave in saying that the Feeling are one of the best draws on the scene at the moment and greatly underrated.
Q: Name two albums / artists that look out of place in your record collection?
A: They all look the same to me. Round bits of plastic with a hole in the middle.
Q: What instruments and amplification do you currently own?
A: DW Collectors series Kit, Yamaha Custom Kit, Zildjian K cymbals. If a boost in volume is required, Paul has a set of Shure Drum Mics which he can put through his Bose L1 system via a Behringer 6 channel mixer.
Q: What is your most memorable gig?
A: Rampton obviously, but there were some great nightclub gigs where we were asked to provide musical backing for the main act.
Q: What is your funniest incident at a gig
A: In one of my first bands we found ourselves on the same bill as a stripper. We were asked to play a backing song but we had nothing suitable. The best we could offer was a Status Quo song slowed right down.
Q: Are you involved in any side projects?
A: Along with Ken I play in a band called Six Across 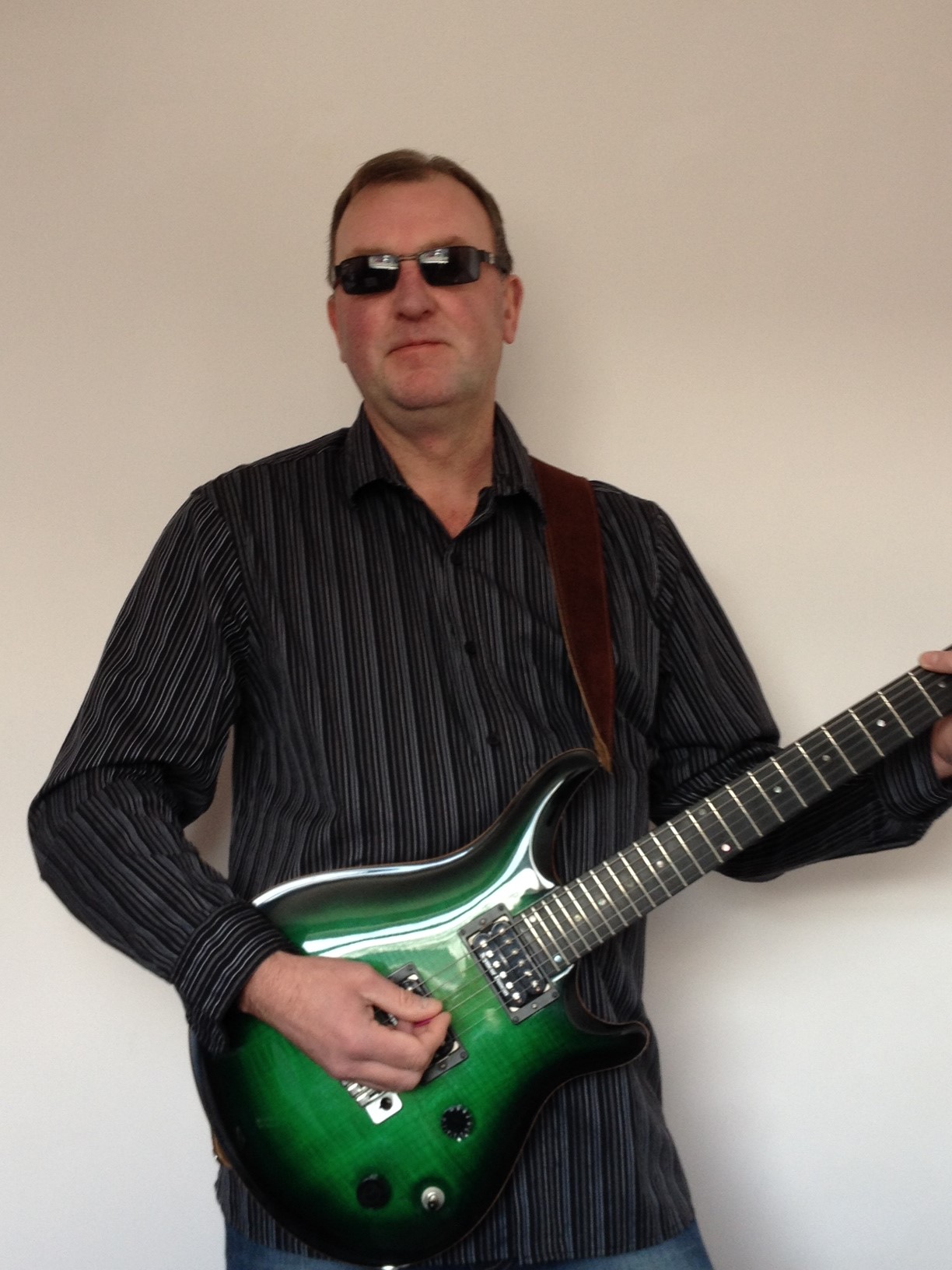 Joined the band in Feb 2014 to enable the band to work as a 4 piece classic rock and pop band also. Patrick Eggle Guitar, Ibanez vintage, Marshall, laney Amplification
Performed in a variety of Rock and Pop bands over the years, including, Blind Justice, Foxy